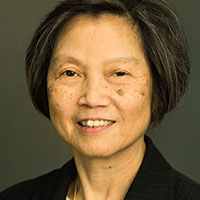 2016 Academic Leadership of the Year

Professor Chan received her Ph.D. in mathematics and joined the Northeastern University faculty in 1977. She is currently the Executive Director of Information Assurance and Cyber Security. Professor Chan’s research focuses on cryptography and communication security. She has also worked on designing efficient implementations on divisible electronic cash, as well as fast, efficient mutual authentication algorithms for small mobile devices. She works on protocols, key management schemes and anti-jamming algorithms for securing communications among devices in a hostile, resource-constrained environment. Recently, she is examining practical algorithms to ensure privacy and security on open clouds. Professor Chan holds two patents, one on ultrafast pseudorandom sequence generator and one on software based stream ciphers. She has also been widely published in IEEE conferences and journals, as well as in Crypto and Eurocrypt. Her research has been funded by NSA, NSF, DARPA and telecommunication industries. She has served on various program committees, Board of Directors of the IEEE Information Theory Society and is currently on the editorial board of the International Journal on Cryptography and Communication – Discrete Structures, Boolean Functions and Sequences.

At Northeastern University, Professor Chan led the effort in establishing an interdisciplinary research Institute of Information Assurance with the Department of Electrical and Computer Engineering in 2005. Professor Chan is also instrumental in getting Northeastern designated by NSA and Homeland Security as a Center of Academic Excellence in Information Assurance Education, Research and Cyber Operations. She designed and launched the interdisciplinary graduate programs, MS in Information Assurance in 2005 and the PhD program in 2010. Professor Chan has been active in promoting women in sciences, in particular, she has participated as an invited speaker at NSA’s “Women in Mathematics” and “Alumni Mathematicians” at Smith College. She is also serving on the Committee for Strategies and Tactics for Recruiting to Improve Diversity and Excellence at Northeastern University.